Ernesto Was a Bust, But the Fair Was Good

All day Friday it rained, sometimes heavy, sometimes lightly, but that was pretty much it. The wind did blow a bit and our lawn is covered with leaves, however it really wasn’t that impressive. Jake and Nate played in the rain and had a great time damming up the flow from our gutters and generally mucking about in the wet.

Saturday was gorgeous. It was perfect weather for attending the county fair. The plan was that we would meet up with Larry’s co-workers at the children’s tent. There are places to sit, it’s out of the sun and there are things for the kids to do. So let’s go to the County Fair. 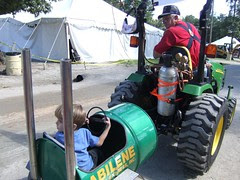 let's go
Originally uploaded by Teckelcar. It worked out very well. We all had each other’s cell phones so we were able to keep in contact and we didn’t have to wait for the stragglers. In fact the boys had a great time with Henry (a co-worker’s son) in the corn crib. If you click on the photo it will lead you to a whole set of photos. 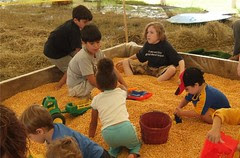 buryHenry1
Originally uploaded by Teckelcar. Even one of the little guys, Christian, helped out. Rebecca, however, was more interested in playing with the apples. Then we all headed over to the barrel train.

All of the kids loved the barrel train and I even got to ride it. On Saturday they had a trailer with a little bench seat on the end and adults got to join in on the fun. I recorded the ride, so now we have a virtual barrel train.

One little guy, that was in our group, rode the train three correction five times. I think his Mom tired of it before he did. And I just found out she actually crammed herself in the barrel with him for his first ride. I know she's very slender, but how on earth did she do it. Where did she put her legs?

Meanwhile we headed over to the midway with a brief stop at the pony ride for Rebecca. 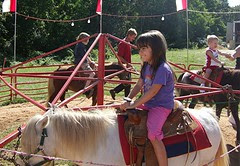 ponygirl
Originally uploaded by Teckelcar. You can see how happy she is up on the pony. Then it was on to midway rides and pig races.

The races were a hoot. The Hogway Speedway was provided by Circle C Farms and was more than just pig racing. There were goats, pot bellied pigs and, my favorite, ducks. The ducks didn’t exactly race around the track. It was more of a high speed waddle in pursuit of a tasty treat back up in the truck. The kids all cheered like mad and had a very good time watching the races.
At this point it was getting late and we started to head home when Max noticed the pony ride. Earlier he wasn’t interested, but now he wanted to have a try. 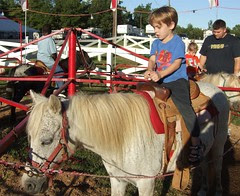 ponyboy
Originally uploaded by Teckelcar. He doesn’t look as happy as Rebecca did, but he did have a good time.