As I briefly mentioned the other day, I brought a cake to the memorial service. When my cousin Kay first called about the memorial service I asked her if there was anything I could do. She was very touched by the gesture and thought maybe I could bring a cake or something. She wasn’t sure and wanted ton check with her sister Victoria. Her sister is a minister and would be leading the service. The next day Kay called back and said Victoria thought a cake would be marvelous.

After a bit of thought I proposed an orange cake with orange filling wrapped in Italian buttercream. Kay was floored, she told that sounded terribly elegant and that I shouldn’t bother. She came around when I told that baking is my thing. I like to bake cakes and I had made my brother’s wedding cake.

Monday I baked the cake layers. I ended up making three of my orange cakes in my 12 inch cake pan. One batch of batter yields one smallish 9 inch cake or one layer for a 12 inch cake. I probably could have skipped the last layer, but I was on a roll.

Tuesday I made the orange filling. It is a type of custard and the first one I have ever made. The recipe is my 1946 Joy of Cooking.

Orange Filling
Sufficent to spread between two 9 inch layers.*
Stir and cook in a double boiler until thick:

**Because this was a double batch I grated the ring of one orange.

While I was making the custard I let it sit undisturbed for long periods. I found out later that I was supposed to continuously stir the mixture while it is heating to prevent lumps. Mine did get a bit lumpy at one point, but I was able it save it with some diligent mixing. The end result was very tasty.

Once the custard ws done cooking I set it aside to cool and started in on the butter cream. I have written about the buttercream before. It is a tricky thing to make, but it is worth the effort. It is easily the best tasting frosting I have ever tasted.
Then it was assembly time. First I put down the bottom layer on my cake board. On top of that layer I piped a circle of buttercream around the edge of the cake to hold in the custard. The orange custard ws then spooned on. The next layer was placed on top and again I piped the buttercream and topped with custard. 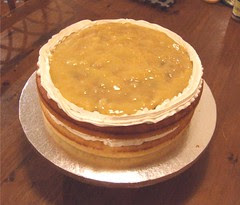 custardfilling
Originally uploaded by Teckelcar. Then the last layer was placed on top. The whole cake was then frosted with buttercream. First was the crumb coat. I then refrigerated the cake to solidify the frosting before applying the final layer. While the cake chilled after the final frosting I made buttercream roses. It has easily been a decade since I last made roses. The buttercream was a bit softer than royal icing, but after a few false starts, a couple of blobby messes and a bit of chilling in the fridge I pulled it off. I glad I was able to do it. I felt obligated to make a few roses since that was my Aunt’s name. Then I added a few leaves and wrote her name on the cake. The finishing touch was a star border piped along the base of the cake. I was quite pleased with the end result and Larry was impressed.

The cake was well received and a fair amount of it was taken home by various cousins to be savored later. As I was leaving Kay handed me a flower arrangement and I took this picture of the cake with the flowers. 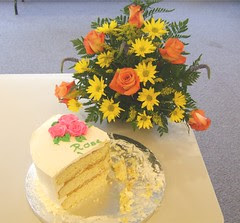 Cake&flowers
Originally uploaded by Teckelcar. You can see the roses I made, which had held up very well. All that is left of my Aunt’s name was Rose, which was very fitting for the picture.
Posted by Sarah at 11:01 AM