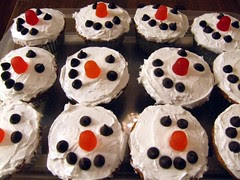 I made these for Jake's class before winter break. On the last day of school before break, his class had their winter party.

Originally I wanted gumdrops for the nose, but they were impossible to find so I settled on Dots. Technically they are a type of gumdrop, but they don't have the sugar frosting. The rest of face was made with the ever popular chocolate chips. I was pretty happy with how they turned out.

Jake said they weren't as popular as the last batch of cupcakes I brought in. However they were competing against a boatload of candy for the gingerbread houses they were making.

Anyway I liked them and Rebecca wants me to make them for her class.