I don’t know if there is any truth to this whole “Global Warming “ thing, the planet has had its warming and cooling cycles before, but it has been much warmer than usual this winter.

This weekend it hit 70, yes 70 in central Virginia. So Larry and the brown eyed boys piled outside to play a little football (Max said it was too hot out and declined to play). 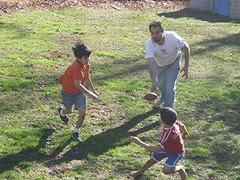 JanuaryFootball
Originally uploaded by Teckelcar. Yes, Nate is barefoot and both boys are in shorts.

Rebecca and I stuck to capris and I found the yard to be a bit wet and squishy, but it was fun to be outside barefoot in early January. I also like the effect on my heating bill, but I do miss winter.