Artist of the Week: Wooden Toys

This week’s artist is a special two for one edition featuring both Max and Rebecca. 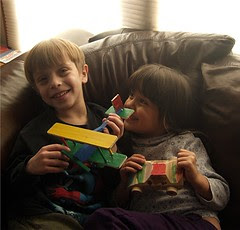 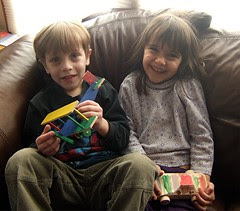 Max&Rebecca2
Originally uploaded by Teckelcar.
Last weekend Max was invited to a birthday party and Rebecca was not. At first I was a little miffed on her part and then I realized at some point they will have separate social circles and that they will not always be invited to the same parties. When I called up and accepted Max’s invite, the birthday boy’s mother told me that David (the birthday boy) wanted only boys at his party because “Girls are too loud.” (Which is a fair statement in regards to Rebecca.) Rebecca was a bit disappointed, but between an extravaganza of My Little Pony DVDs and my playing Candy Land with her she got over it very quickly. And let me state here: Candy Land is possible the world’s most boring game for an adult to play. There is no strategy, just the luck of the draw.

Anyway, all was fine until Max came home. He had received a balloon and a little kit to make a wooden biplane. She got a bit jealous and was coping until the bombshell hit.

Max told her that she had been invited and that David asked “where was Rebecca” when he first saw Max. She had a complete melt down. In the end I was able to calm her down when I pulled out an extra wooden race car from “the party box” that had been left over from an older brother’s birthday party.

Sometimes it pays to be a pack rat.

So here are the finished products:

Car&plane
Originally uploaded by Teckelcar.
I helped with the gluing and gave Max a few pointers on how to paint, but the color scheme was entirely up to Max and Rebecca. They love their new toys and are very pleased that they got to do some building and painting.
Posted by Sarah at 7:24 PM