Last night we went to a VCU basketball game. The team is hot and the game was sold out. So we showed up very early to get parking (ideally free) and good seats (we had general admission and with six people it pays to show up early). We completely scored on both counts.

Our parking space was right out front. It was legal, free and three cars away from the entrance. As we pulled up Larry wasn’t sure if it was big enough for the van, but I assured him it was and with Larry’s superior parallel parking skills, he was able to neatly slip the van in.

Then on to the game, we breezed in and headed to our section. It wasn’t clear how far down we could go, theoretically the rows closer to the floor are for students, but we couldn’t tell where. So we decided to get the best seats we could and worry about it later. We ended up filling a whole row.

The game itself was amazing, the teams were closely matched and you really had to stay until the end to see who won. 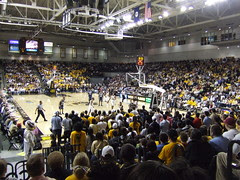 VCU
Originally uploaded by Teckelcar.
Nate and Jake were enthralled by the game. 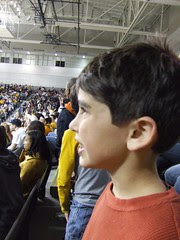 Nate
Originally uploaded by Teckelcar.
Max and Rebecca, however, were less than thrilled and wanted to leave after 15 minutes. Rebecca did like cheerleaders so she was entrained whenever they took they court. Here is a short film of the cheering squad in action.


In the end VCU beat Old Dominion. I guess we are good luck for the team; every time we go, VCU wins.
Posted by Sarah at 11:57 AM