An Evening with the Governor

As I mentioned last year, my husband and I got to attend a party at the Governor's mansion.

It was the first night of Chanukah and Meryl was just able to get the candles lit before Sabbath. It was a close call, I was out picking up dinner while she watched the kids and got things going.

Anyway, for once I was ready and left the house on time. Life is so much easier when I don't have to marshal the troops. The plan was that I would meet Larry in Richmond and we would enter the Governor's mansion together, enjoy the party and then we would go out for dinner at a nearby sushi place.

The mansion was quite pretty and nicely lit on the outside. I took a picture, but since I didn't have a tripod handy the picture really doesn't do it justice. 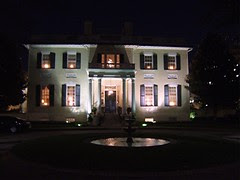 Governor's
Originally uploaded by Teckelcar. Larry got a much better shot of me at the front door just before we went in. 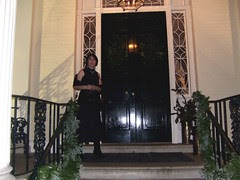 Frontdoor
Originally uploaded by Teckelcar. It actually took him a couple attempts to took this picture. The first time he was just about to take it when the doorman whipped the door open. He quickly understood what we were doing and closed the door and waited for us to be ready.

When we entered the mansion the first person we noticed was the Governor. He is a very approachable person, he welcomed us to his home and then we chatted a bit with him when my cell phone rang. Figuring it was Meryl, since the only other person who ever calls me on my cell was next to me, I excused myself and retreated to an empty room to take the call. It was indeed Meryl and she was wanted to know if the dogs had been fed. The kids did not know and the dogs, being hounds, looked hungry. I told that the dogs had indeed been fed and then said "guess who I was just talking to? It was the Governor!" Once I was done with the phone I wandered back into the hall to find my husband.

We mingled for a bit with some of his coworkers and then we joined the line for a photo with the Governor. When it was our turn I was very impressed that he remembered us from earlier, namely he asked me who called. I cheerfully told him it was the babysitter and she wanted to know if the dogs had been fed.

I know it is a minor detail, but a telling one. Tim Kaine is a pretty sharp guy. I don't think Warner would have noticed and certainly not Gilmore.

The party itself was quite good. There was an open bar stocked with top shelf drinks and an outrageously tasty buffet. I could have easily grazed there all evening and would have gotten a nice meal out of it. Instead we ate heartily, but not fully since we were planning to go out for sushi afterwards. It worked out well. I like sushi, but I don't find it particularly filling. This way I could savor our dinner without filling starved afterwards.

As for pictures of the party I limited myself to just one. 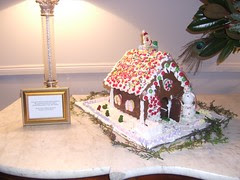 gingerbread
Originally uploaded by Teckelcar. I couldn't resist photographing a gingerbread house made by the Governor's family. If you click to enlarge the picture you can just read the card next to it. I thought it was a charming little thing nestled amongst all the antique finery of the mansion.

Normally I hate cocktail parties, but this one was fun. I know some of Larry's coworkers and I had a good time talking with them. Of course the two gin tonics didn't hurt either. I was in a very happy place. It was a fun date night for me and my husband. Thank you Meryl for a such a lovely birthday present.
Posted by Sarah at 11:42 PM