About 6 or so months ago Rebecca has been asking when it was going to snow. My stock response was “sometime in December.”

As December grew closer and the weather remained mild, I started to hedge my bets. I would tell her that there was a chance that it would snow in December, but the bulk of our snow occurs in January and February. Then I would remind her that we would be going to Nana’s at the end of December and there would be snow at Nana’s house.

Around mid-December I started to worry. My mother had gotten a light dusting of snow, but it was all gone the next day. There was no snow in Vermont. For our trip up north was going to be the Green Mountain State for real.

Rebecca was disappointed when we first got to my mother’s house, but she held firm in her beliefs that it would snow. Christmas came and went and there was still no snow. That night, as I tucked her into bed she stated “It’ll snow tomorrow.”

That night she got her wish. This is what greeted our eyes the next morning. 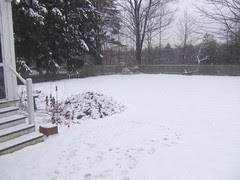 Nana'sbackyard
Originally uploaded by Teckelcar. The kids had a quick breakfast, stuffed themselves into their snow gear (that I had fortunately dragged up North) and piled outside to play, meanwhile I shoveled the drive. About halfway through the driveway Rebecca wandered over it see what I was doing and then headed inside.

Once I was done with my self appointed task I moved to the backyard to take pictures of the kids. The boys were having a great time making miniature snowmen and knocking them over with snowballs. The snow was very wet and was perfect for packing into snowballs. 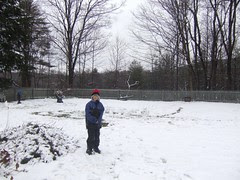 Jake
Originally uploaded by Teckelcar. This is what the yard looked like after a few hours with my kids.
When I was satisfied with my pictures I headed inside.

When Rebecca saw me prying off my boots she burst into tears. After a few minutes of very distressed crying I found out she wanted me to take pictures of her in the snow.

We both bundled up and went back outside. 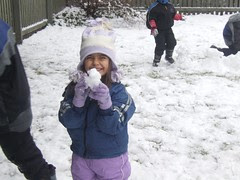 Pleased
Originally uploaded by Teckelcar. If you click on the above picture you get a whole series of pictures of the kids playing in the snow. And as an extra special treat I even shot a short movie of their snowball fight.


I like their version of a snowball fight. There are a whole lot less tears involved than in the traditional version. Jake and Nate, with a little help from Max and Rebecca, made a series of small snowmen. The objective is knock over the other team’s snowmen.

They all had a great time and their snow pants and jackets were soaked by the end. We wisely held off on sledding until the next day. Larry and I figured that the hill would be a big sloppy mess, but with a good over night freeze it would be perfect sledding conditions the next day.

And boy were we right. At least this year we didn’t bust any sleds.
Posted by Sarah at 4:42 PM