Flying On A Jet Airplane

This weekend Larry and I got away for the weekend. A very good friend of his was getting married and the wedding was in Manhattan.

The whole family was invited, but we decided that it was just going to be the two of us, alone together in the big apple. I love my children, but weddings are much more fun without them and I really didn’t want to buy six plane tickets, two was enough. Larry’s mother and step dad were kind enough to stay with the kids while we went to the wedding (they also got to go to a special reception that I’ll tell you about tomorrow).

Sunday morning we left bright and early. We had a morning flight that would get us in early enough to settle in our hotel and get ready for the 5:00 pm nuptials. 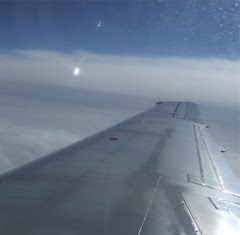 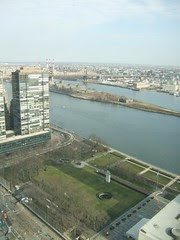 UN&RooseveltIsland
Originally uploaded by Teckelcar.
Our hotel was quite fancy. At Larry’s suggestion we tried Hotwire and I totally scored. We ended up at the Millianium UN Plaza at half the normal rate! The room had a fabulous view of the East River, Douglas MacArthur Park, Roosevelt Island, a corner of the UN, 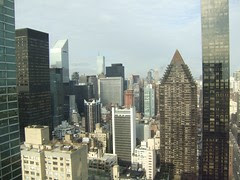 
Trump World Tower (which dominated our view) and the Citigroup building.

The wedding was down by Union Square at the Manhattan Penthouse. It too had a glorious view of the city. 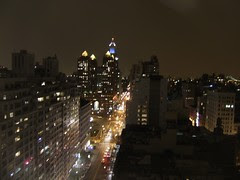 The guest list was small, less than a hundred, which in my opinion makes for a nicer party. We had a great time reconnecting with people we hadn’t seen in years. One of the funniest moments happened late in the night. At one point somebody noticed that snow had started to fall. Big fat flakes were eddying by the picture windows that lined the wall. A half dozen or so of the bride’s friends were from Southern California and apparently this was their first snowstorm. A gaggle of thirty year old women rushed to the windows and transformed in a shrieking mob of teen aged girls. It was very loud and downright comical.

The next morning Larry and I breakfasted at a classic New York coffee shop. We had both had big platters of scrambled eggs, sausages, home fries with a big stack of toast. In a few hours we were meeting up with the newly weds and a few others for brunch at a vegan restaurant and we needed to fortify ourselves. And all I’ll say about the vegan place was that it was exactly as I feared. I don’t like beans and every other time I’ve had a vegan meal I end up feeling even hungrier a half hour later. I can deal with lacto vegetarian food, some of it is quite good, but I don’t care for a vegan diet. I’m an omnivore and I very happy to be that way.

Then it was home again to spring the dogs and let the grandparents wing their way home. 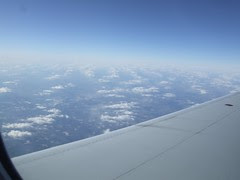 wing2
Originally uploaded by Teckelcar.
Posted by Sarah at 5:57 PM