John is a very busy dog, which is the norm for a smooth dachshund and even more so for his line. The kennel where we board our dogs used to refer to Crunch as the wild man. They all like Crunch, but as I like to observe he used to be a high octane dog. When Crunch turned twelve he finally slowed down to the energy level of a normal dog. So of course now we have John.

The other day I was puttering about when John started barking at the door. Something had caught his eye and wanted to go out. Right. Now. I however did not want to inflict him on the neighborhood because I knew he would be fairly vocal for a long period of time. I like his bark, it is a typically houndy bark and not at all yappy. So I decided to film him instead.

I get peeved when people call dachshunds little yip dogs. They are far from it. Admittedly the miniatures have a much higher pitched bark, but they are all hunting dogs by nature. They are used to trail wounded deer, hunt rabbit and squirrels and are a good all over vermin eradication system. Of course that means you’ll get some holes in your backyard as they try (and succeed!) to get the moles. But at the end of the day they are happy to curl up in our lap or at your feet. 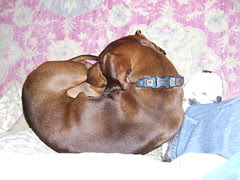 Sleeping Dog
Originally uploaded by Teckelcar.
He is such a cute dog when he’s asleep.
Posted by Sarah at 11:12 AM