Last night at dinner the subject of tattoos came up. Namely Nate announced that he was interested. I have no recollection on how the conversation ended up on the subject, but there we were. 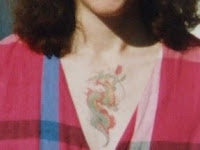 Tattoos are not something that appeals to either my husband or me. Neither of us has been inked with the exception of a very large and lurid temporary dragon tattoo I got when I was in Wisconsin. One day a half dozen or so women in the lab I worked in decided we would all get temporary tattoos. We picked a place that was adjacent to the neighborhood bar and piled in. Except for Chen Hui and me, everybody else got rather small discrete ones. Chen Hui got a palm sized snarling black panther head on her shoulder a I got a 5 inch long coiled dragon holding a rose positioned just below the notch in my clavicle. The funny part was that the tattooist seriously asked if I was sure since it was so very large. I reminded him it was temporary and that I understood what was going on. It was fun while it lasted, but I was glad when it was gone a week later. The real thing, however, doesn’t interest me because it is permanent and I’m a wimp. And I won’t even go into the religious ramifications.

Anyway enough about me and my wild youth, lets get back to the dinner table.

After a pause to digest this thought I asked Nate if he knew what happens when you get a tattoo.

He shook his head no.

Ah-ha, I had a perfect answer to his inquiry.

I told him simply and plainly that it involved a needle being repeatedly poked into the skin. You get jabbed hundreds of times by this needle. The color was poked into the skin by the needle where it stays for the rest of your life. After the tattoo is applied the area can be bloody and sore and you have to care for it until it heals. I then mentioned it is possible to remove a tattoo, but it has to be burned off with a laser.

Nate’s eyes got big and round and the idea of a tattoo was driven clean out of his head.

Nothing like the truth to nip an idea in the bud.
Posted by Sarah at 2:36 PM