Artist of the Week: An Artist's Eye Jake&turtle
Originally uploaded by Teckelcar
This week's edition of Artist of the Week is a bit of a departure from the norm, or at least what passes for the norm around here. I picked Jake this week not for any particular piece of art, but for his eye.

He is always the first to notice anything new or different. His eye is attracted to the tiniest details.

He is always the first to spot critters in our back yard. Today it was a female box turtle making her way across the lawn. Yesterday it was an owl in the woods behind our house. Last week he picked up an odd rock in our driveway and it turned out to be a fossil. He was the first one to notice the abundance four leaf clovers near the bus stop.

This drives Nate batty. Whenever Jake spots something Nate pouts a bit and says that he wished he would be the first to find something neat. I tell him its because he is too quick, he needs to slow down.
Nate is a study in motion and is always tearing his way through life. This trips him up sometimes, he really does need to learn to stop and think or at least slow down. 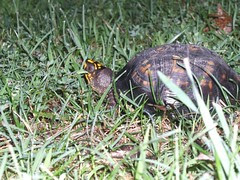 turtle
Originally uploaded by Teckelcar
Anyway this is the turtle Jake found early this evening.

You can tell by the brown eyes it is a female box turtle, the males usually have red eyes.

According to Jake he had wandered by the side of the house and had not seen anything. He returned 15 minutes later and there she was. He called for his siblings and sent them in to fetch me. Jake was very pleased that I had grabbed the camera on my way out.

At first her head was drawn in, but after some quite waiting she poked her head out to give us a good looking over. She didn't move much when we were around, but 20 minutes after we left her I took a peek and she was gone. They can be speedy little things when left alone. 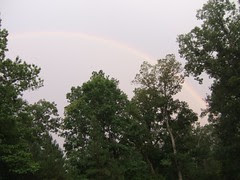 rainbow
Originally uploaded by Teckelcar
As the evening wore on we all went back inside to escape the bugs and start Max's therapies. Jake wandered out onto the deck and spotted a perfect rainbow above the trees in our backyard. It was the lightest of rains and the the sun was still high enough and was able to break through the cloud cover.

The photo really doesn't do it justice. Each band of color was clearly delineated and you could see them all. This was the best rainbow I have ever seen around our house. I'm so glad that Jake called us outside to see it. It was a real treat for all of us to see.

Then fifteen minutes later (really you can check the time stamps if you click on the photos and then click on more properties under additional information) as the light faded and the rain stopped Jake looked out of the windows on the front of the house . 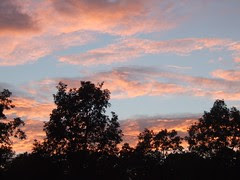 sunset4
Originally uploaded by Teckelcar
The colors of the rainbow had faded away in the eastern sky, but in the west the sunset was filled the sky with its own luminous palette.

The scene was very evocative of Maxfield Parrish. If you click through I have a sequence of photos put together as a set. This particular picture is the last in the series.

Jake was quite amazed with all the things he had seen today and so am I.
Posted by Sarah at 11:50 PM