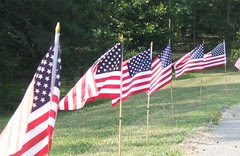 FLAGS
Originally uploaded by Teckelcar
One of the nicer traditions that our subdivision has is a Fourth of July parade. It starts at approximately 10:30 am and winds its way down to the community pool. The pool than opens at 11:00 am with free snow cones for everyone. Then throughout the day there are games and hot dogs on the grill for all to enjoy. It’s very cute and our kids love it.

Now I have to admit the only reason that we do the parade is the fact that the parade lines up on our street. All we have to do is stroll down the end of our drive and voilà we’re in the parade. The only negative to having the parade start on our street is that one year a bunch of people parked on our lawn with one particularly rude family dumping some rocks. To prevent this from happening again I bought a ton of small flags and set them up along the edge of our property. I like how it looks and it keeps people off the grass. 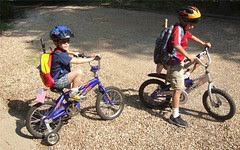 pre-parade
Originally uploaded by Teckelcar
Anyway, this year was a little different for us because Nate and Max were going to miss the parade. They are taking tennis lessons down at the courts near the pool and their age group starts at 10:00 am. According to the guys running the program almost no one shows up on the Fourth. The few that do show up get a private or nearly private lesson. This struck me as a good deal, so we decided to have the middle boys bike down with Larry as a sort of “pre-parade.” We would put a little flag on their bikes and send them on their way.

Outfitted with backpacks to carry their water bottles, rackets and hats Max and Nate were good to go. They liked to idea of being the lead off for the parade. Once they were gone I got to shower, have a little breakfast and ready the rest of us for the official parade. 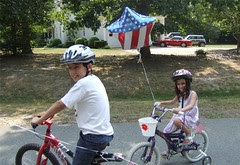 parade
Originally uploaded by Teckelcar
Rebecca was frantic this year and kept running back and forth from the house and the drive, urging me along as I decorated her bike. She and Jake decided to use the balloons from Jake’s birthday party (which were a very patriotic star decorated with a stars and stripes design) and some more little flags I had in the house. For the wagon, aka the support vehicle, I settled on wrapping it with some red, white and blue ribbon, one of lawn flags in the back and artistically stuffing the swim noodles to form arches. At the stroke of 10:30 we were at the rear of the parade. Rebecca looks so pleased to be there with her handsome big brother. 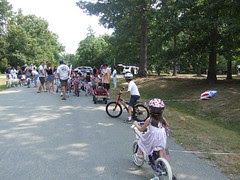 parade2
Originally uploaded by Teckelcar
Ten minutes later and a quick trip back to the house for Max’s enzymes, the parade started to roll. It’s a short walk to the pool with the only obstacle being the long stretch of hill leading down. Everybody checked their brakes and pretty much got down it without incident. I can’t say all because Rebecca tipped her bike and got a tiny scrape on her knee. This resulted in a great deal of tears, but she did go through with the parade. She bravely waved to the crowds as she ever so slowly biked down the hill.

The snow cones at the end made it all worth while. And I say snow cones because I know we all had at least two apiece.
Posted by Sarah at 12:57 PM