The Princess Almost Got a Crown 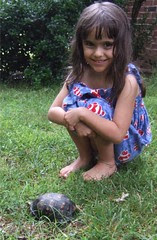 rebecca&turtle
Originally uploaded by Teckelcar
Last month Max and Rebecca had dental appointments. Max, much to everyone's surprise was a real trooper and a very cooperative patient. Rebecca, on the other hand less so. In fact she wasn't even willing to sit still for x-rays.

Unfortunately, Rebecca was the one in need of a follow up appointment. She had a couple of iffy spots that were most likely cavities. Their regular dentist is a pretty good guy and is smart enough to realize that Rebecca needed to go to a pediatric specialist. So referral in hand, I made an appointment with the fancy pediatric specialist. It ended up being last Thursday.

We went in and were duly impressed by the practice. Rebecca was in a chatty mood and quickly felt at ease. The specialist came in, poked about a bit and gave me the bad news. One tooth, her upper right molar was badly chipped, to the point that she needed a crown to save it.

I was horrified that I had missed this. That is until I thought things through. It had taken two dentists and a dental mirror to catch it.

He couldn't do anything today because sedation would be needed along with a big block of time. I then got passed on over to the scheduler. One of her first questions was how soon, my reply was as soon as possible. How about tomorrow? It turned out they had just gotten a cancellation. The only problem was that she needed a checkup with her pediatrician. But hey, Max and Rebecca just had their annual checkup last week and I had the school's entrance health form all filled out and sitting at home. Talk about the stars aligning. All I had to do was write many checks and promise not to feed her after midnight.

On Friday we showed up bright and early with a surprisingly cheerful Rebecca. Normally before breakfast she is a little bear in the morning, but not today. She got weighed in, drank the sedative and then waited for it to take effect. It didn't actually put her asleep, it just relaxed her and made her a bit loopy. When she was ready a nurse collected her and carried her off.

And then we waited.

An hour later a staff member came out and told me it was over and they would bring her out soon. It turned out that they had to pull the tooth. It had abscessed and they could not save the tooth.

The poor thing, who knows how long she had that abscess. She never complained about her teeth hurting. It may have even been the cause of her mysterious illness. It kind of made sense. The three rounds of antibiotics might have just enough to hold it bay. Anyway she is feeling fine and tonight the tooth fairy will visit. We had to remember to get the tooth out of the car, as Jake pointed out, the tooth fairy won't come until you put the tooth in our special moon pillow. 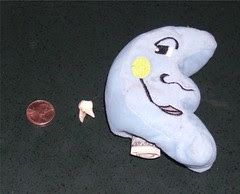 moon pillow and tooth
Originally uploaded by Teckelcar
Posted by Sarah at 10:24 PM