The regular season for baseball came to a close for Nate’s league around the end of school. But... since Nate’s team completely dominated their division (16 wins, zero losses) they were off to the playoffs.

firstbase
Originally uploaded by Teckelcar
Nate’s team as tied with another for first place and during a coaches’ meeting they got first seed, courtesy of a coin toss. Then it was on to the games, the top third of the qualifying teams got a buy in the first round. After the second round it became a double elimination tournament.

Their first game was Friday before last and they won their game pretty handily. I missed Saturday’s game because I was busy at my dog club’s specialty show. They again won and Larry said it was a very interesting game. Which is not too surprising, the level of play should be increasing as tournament goes forward.We all went on Sunday including Aunt Meryl. It was a gripping match up. At first we led the game, but at the top of the last inning the other team surged ahead. It was heartbreaking watching our pitcher fight back the tears. He was so very intense, but he is still just a little boy. We struggled through the inning and then it was our turn to bat. Fortunately we were at the top of the order and our boys got on base. Then our pitcher stepped up to bat and nailed the ball on out to the outfield. It was a homerun and we won the game! 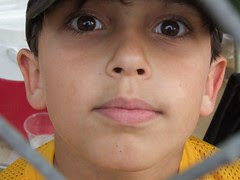 please
Originally uploaded by Teckelcar
Tuesday was our next game and it was for a spot in the final championship game. Meryl rejoined us, she was sucked in with the drama of the last game and had to see what was going to happen tonight. Unfortunately it was a night game that was scheduled to start at 8:00 pm. I don’t know about the other kids, but Nate’s bedtime is 8:30 pm, already it was a tough start. Then we saw our opponents. All I can ay is that they were the biggest eight year olds I’ve ever seem. Some could easily pass for 11. It was a grim game; the other coaches were not very nice and exploited every loophole. Sadly our boys lost, but they put up a valiant fight. However, not all was lost. If we won our match up with the leader in the elimination bracket we would still go to the championships. 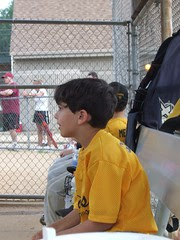 dugout
Originally uploaded by Teckelcar
Our make or break game was scheduled for the next day at 6:00 pm. Just as the game was about to start, a line of thunderstorms rolled in causing a game delay. We scattered to our cars to wait it out. Half an hour later, the boys were back on the field. It was a much pleasanter affair than the previous night’s game. The stakes were high for both teams, but every body remained friendly. It was a good game, but in the end we lost. We wished the other team well and hoped they would beat the other team. It wouldn’t be easy for them, since it was double elimination they would have to beat them twice.

So we didn’t win, but third place is still pretty dog gone impressive. Oh and the not so nice team, they ended up losing to the nice guys.
Posted by Sarah at 11:26 PM