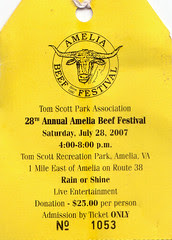 beef fest
Originally uploaded by Teckelcar
Yesterday we went to the Amelia County Beef Festival, or as Meryl pointed out to Rebecca, The Yummy Beef Festival.

Originally we were not able to go, Nate's team was having its end of the season party at roughly the same time. It was very disappointing to us all as this was the first year Meryl was actually free to come along with us. Then Friday night we found out that the party was postponed, the youngest child of the party's host family was just home from the hospital. Recovering sick babies and baseball/pool parties do not mix.

When I got the news my first reaction was "Hey, now we can go to beef fest!" The tricky part was getting tickets. I know the first time we went (seven years ago) we paid at the gate, but in subsequent years this has no longer been an option. Of course we got the news while we were at a ball game, so I gave Meryl a call to tell her the news and get the ball rolling for tickets. Unfortunately it was too late, none of the listed ticket sellers were still open. That left us Saturday morning to see what we could get.

Meryl called the Chesterfield Berry Farm first thing Saturday morning, all she got was a weird fast busy signal. At about half past nine I gave it a shot and got through. After wading through the voice mail options a bright cheerful voice answered the line and yes, they had tickets. I hung up the phone, turned to Larry and told him I was going to the berry farm right now to get tickets. He responded with "go, go now." 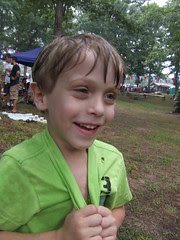 wet Max
Originally uploaded by Teckelcar
An hour later I had a dozen ears of corn and seven tickets.

Meryl came over later that afternoon and we all headed off together with folding chairs and a shelter piled in the back of the van. It was a brilliantly sunny day when we left home, but as we drew closer to the park the skies grew darker and darker. I t looked like it might be yet another wet beef fest.

We showed up just at four and parked on the field with all the other cars and trucks. Everybody piled out of the van and we schlepped all our chairs and the shelter inside the park. We made camp and about half an hour later it started to rain.

The kids didn't mind, as you can see by Max's grin and we were relatively dry under the shelter. It's not really meant for rain, being a sun shelter, but it did help keep the worst off of us. Next time we'll have a proper water proof tent. 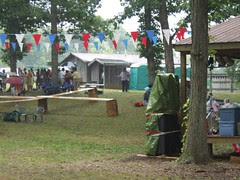 table guy
Originally uploaded by Teckelcar
When I took that picture of Max Jake and I noticed a peculiar figure in the distance.

There was a guy standing in the rain with a table on his head.

It was an interesting solution to the rain. Amazingly he kept the table on his head all throughout the rainstorm, and even went so far as to sit in a chair with the table on his head. I walked by him at one point during a potty run for Rebecca and noticed he had procured a cushion for his head.

The tickets do say rain of shine and they are not kidding. The festival attendants know this and are not going to bail out because of some rain. 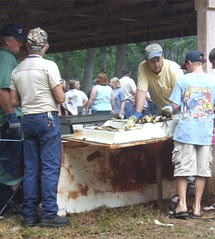 roast corn
Originally uploaded by Teckelcar
Both of the times we previously went it rained at least part of the time and the only thing that would change is that the bands would tarp their amps and maybe go on break when it really poured. Meanwhile the beef kept getting served along with the beer, soda and corn.

And speaking of corn, this year it was outstanding. The organizers roasted up boxes and boxes of corn and it was all delicious. The other two times we went the corn was not very good. We would have an ear apiece and that was it. This year I lost count. I now understand the appeal of roasted ears of corn.

The picture over there on the right shows the unique way the corn is served up. Old refrigerators are laid down on their backs and the doors are flipped open. A stick props up the door so that it can act as a sort of impromptu counter. The freshly roasted ears are piled into the main compartment and a few ears are piled up onto the door for people to grab. The insulation in the fridge keeps the ears nice and toasty.

The beef (barbecue, steamship round and ribs) was all very good. The band we parked ourselves was excellent and so was the company. It's a truly southern crowd, much more so than around Richmond. The kids have a great time running around and Larry and I got eat, drink, be merry and do a little dancing.
Posted by Sarah at 10:09 PM