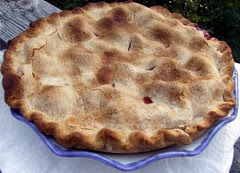 strawberry-rhubarb pie
Originally uploaded by Teckelcar
Last week I picked up a four pound box of strawberries at Costco. They smelled heavenly and the price was crazy cheap. I decided on the spot that I would make a strawberry rhubarb pie.

It took a few days for me to pick up the rhubarb. I really should grow my own, but I
can never get around to actually buying a plant. I know it grows like a weed and would take little effort to maintain it. Anyway I finally got a few stems at the supermarket.

The recipe I use was one I found on the internet almost 10 years ago, April 23, 1998 according to the date stamp from the printer. It was contributed by Aviva Garrett and was copyrighted by Shona A. Ward on a now defunct website.

This recipe came from the Los Angeles Times about 15 years ago (make that 25 now).

Cut the strawberries in half.Place in a bowl with the cut rhubarb and add sugar and tapioca. Mix and let sit for at least 15 minutes.

Make the pie crust: Cut the shortening and flour together. This can be done with two knives, with a pastry cutter, or with some electric mixers. When the mixture has an even consistency (it should resemble coarse sand), add milk (or water). Take about 5/8ths of the dough and roll it out on a floured board until it is a little bit larger than a 10 inch pie pan. Put this in the pie pan. (The rest of the dough is for the top of the pie.)

Pour the strawberries and rhubarb mixture into the pie crust.

Roll out the remainder or the pie crust. Place on top of the pie, crimping the edges of the top and bottom crusts together. Make one or two slits in the top of the crust for steam to escape.

Bake 45 to 50 minutes at 400 or until syrup boils with heavy bubbles that do not burst.

Notes:I recommend putting a piece of aluminum foil under the pie as it is cooking, because it invariably leaks. This will save you from having to clean up the oven.

*I totally cheat and buy a roll out ready made pie crust, but I have used this recipe and it was pretty good.

**I used three stems, it was in all likelihood less than a pound. Precision is not important. 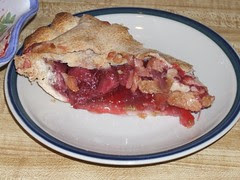 pie slice
Originally uploaded by Teckelcar
The pie cooked a bit longer than 50 minutes, more like an hour. I go by the bubbles, the best piece of pie advice I have ever gotten. To keep the crust from getting too dark I covered the pie with foil after about 50 minutes.

I made it Saturday night and we had for breakfast Sunday morning. Jake, Larry and I thought it was delicious. Nate doesn't do pies and the dynamic duo did not care for it. That's fine, it left more for the older half of the family to enjoy.
Posted by Sarah at 5:48 PM