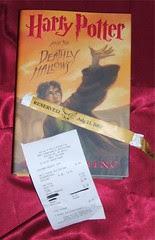 The book
Originally uploaded by Teckelcar
So yes, I went to the bookstore Friday night for the Harry Potter and the Deathly Hallows book party. The plan was for Meryl to arrive at about 8:00 pm and stake out a place in line and I would show up when I could. Festivities were scheduled to start at 9:00 pm and we wanted to be sure to get inside. I wanted to be able to experience all the fun and not get stuck outside. Three plus hours inside where I would be free to move about is far more appealing than being trapped in a line outside in the heat. We hit it just right, as I drove up there was no line, but I understand it started to form not long after. I also took Jake and Nate with me and we all dressed up, the boys more so than myself.

I figure if you are at a party, you might as well dress the part. 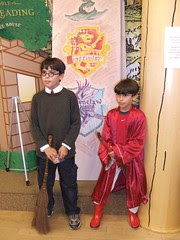 Harry and a Quidditch player
Originally uploaded by Teckelcar
Jake, as you can see was a first year Harry Potter. He had it down to the tape on the glasses. Nate was a Gryffindor quidditch player. I was Tonks and my costume was basically blue and red streaks of colored hairspray, lots of bangles on one arm and Max's broomstick. It was lame, but much fun. I even entered the costume contest and came in second for my age group, those over 18. Mind you there was only one other entrant in my age bracket and she put a bit more effort into her outfit, but it was close. I am proud to say that I declared on stage that "this is for the moms!" It got a good reaction from the crowd and it probably helped my cause.

Jake also participated in the costume contest. He gamely got up on the stage and judging by the applause was a solid second. The girl to his right (with the hand being held over her head) won his group. 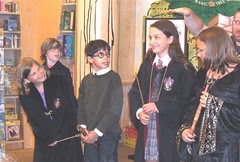 costume contest
Originally uploaded by Teckelcar
There were quite a few notable efforts. One kid was dressed as Hagrid and did it up right, from the bushy hair to the frilly umbrella. There was also an outstanding "Mad-Eye" Moody, but in the end a Harry won.

I also liked the deliberately off-key entry. One guy had on a green graduation robe and a swiffer instead of a broom. He didn't win, but he did generate a few laughs. Batman, Robin and Spidergirl also made an appearance, but were only greeted with mild applause.

Then the countdown began. All throughout the evening announcements were made as to how much time was left. Each time the crowd would cheer, but the biggest ripple of excitement was when the cashiers were told to assume their positions and man the checkout. 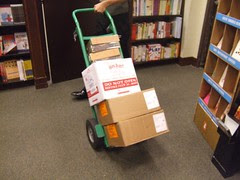 books
Originally uploaded by Teckelcar
At 10 minutes to go the books started to be wheeled out to the checkout. I missed the really big cart crammed with boxes for the front of the store. One of those, oh yeah, I should take a picture of this moments. But, I did get this one of the books headed to the music department. All available checkouts were pressed into service with the exception of the cafe. The crowd was really starting to get restless at this point, but being a bookish lot was very quiet and polite.

Then at one minute past the stroke of midnight, the lucky bearer of wristband #1 bought the first book.

As Meryl and I waited for our turn we noticed the security guys and it was too funny. 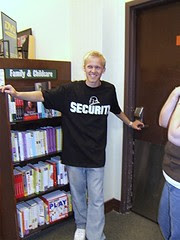 security
Originally uploaded by Teckelcar
It was a couple of guys with black t-shirts that had security emblazoned across their chests. I informed this guy that I had to blog him. He had no choice, I was going to take his picture and post it.

Oooo, security to protect the books from the rabid Harry Potter fans. Considering that the books were under lock and key until the last moment, I don't think he had much to worry about.

As you can tell he thought the whole thing was pretty funny.

About 10 minutes later he had to get back to work and dragged out some more books for the music department. My guess is that my book is in one of those boxes. 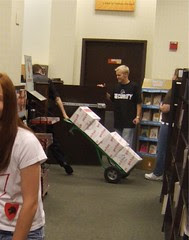 The books!
Originally uploaded by Teckelcar
My group, numbers 250 to 260 got sent over to the music department. Then it seemed like in no time at all I was at the head of the line.

In fact I was so busy chatting with Meryl they had to call me over. It was very efficient. As they opened the boxes they would immediately bag the books. The result was that I had my book by 12:16 am.

Wow, I was called up after 250 other people/wristbands only15 minutes after the cash registers opened, that was most impressive.

As we left the store I was staggered by the huge crowd outside. Cosseted as we were inside, we had no idea what was going on outside. I guess we could of checked, but the risk of getting stuck outside and put at the end of the line was not worth it. We had heard that there was a enormous line outside, but I really didn't expect what we saw. 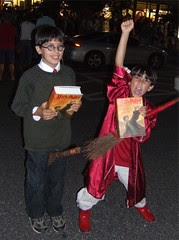 Books in hand
Originally uploaded by Teckelcar
And of course, I had to take a picture of the boys in the parking lot with books in hand. It was a fun evening and I think Jake and Nate had a good time. I am also proud to note that both boys were very well behaved.
Posted by Sarah at 10:08 PM