Artist of the Week: Tower 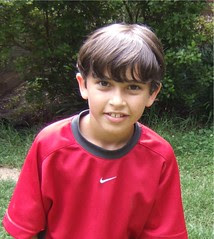 Nate
Originally uploaded by Teckelcar
This week's artist is Nate. Now that baseball is over he can concentrate on such things as tennis, running around, bicycling, bugging Jake and building elaborate structures with his siblings.

Most of their structures are some sort of army base. Right now there is a huge one in the room he shares with Max. All of them have contributed to that particular structure, but this week it's all about Nate.

A couple of days ago Nate was playing with the wooden train track we have downstairs. WE have a big box full of track, tunnels, bridges, what have you. And then there is the big basket with trains and a castle. The stuff was not cheap, but it is holding up very well after six years of hard use. tower
Originally uploaded by Teckelcar
Anyway, Nate made this tower out of train track. It so impressed his siblings that they all asked me to take a picture. You can see a little peek of solider on the ground floor of the tower.

What was really impressive about it was its stability, people thundered about and it stayed up. I *almost* felt bad when it got taken down.

So that is how he is spending his summer when he is not outside.
Posted by Sarah at 4:31 PM