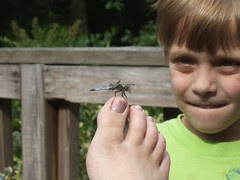 foot, Max and dragonfly
Originally uploaded by Teckelcar
The critters were out in force this weekend.

On Sunday I was out on the deck with my feet up when a dragonfly came by for a visit. It buzzed around a bit and then landed on my big toe. It would stay for a few moments and then fly away, only to return. After the third time I decided to send one of the kids in for the camera. Obviously this insect wanted its picture taken.

After a few false starts and a bunch of pictures with either Max or Rebecca, it once again alit on my toe. It stayed there a good 5 minutes before it flew away, this time for good.

I love the iridescent blue of its tail and I got to get a very good look at the coloration of its body. It seems that it has diagonal stripes all along its thorax in a very striking black and white pattern. At first I thought it was checkered, but it looks more like stripes upon closer inspection.

I don't know why it was so attracted to my deck and my feet in particular, but I did enjoy the time it spent on my toe. Its feet produced the gentlest of tickling sensations. It didn't hurt and I knew it wouldn't, Dragonflies are only dangerous if you are a mosquito (another reason to like dragonflies).

snake2
Originally uploaded by Teckelcar
Then today I spotted this attractive fellow dangling from a tree in front of our house. I was just pulling out of the garage when I noticed something odd about the tree. One of the branches seemed to be extended a bit farther than I remember and the end was entirely leafless. Then it hit me, it was a Green Snake!

I parked the car, admonished the kids to stay in the car and dashed in the house to grab the camera. It had pulled itself back onto the branch by the time I returned, but I was still able to find it nestled amongst the leaves. I shot over a half dozen pictures, hoping at least one would turn out. I ended up with two good shots, this one is the better of the two.

We also have a family of bunnies bouncing around in the yard, but they are far to quick for me to catch with the camera. These rabbits are not dumb, they know that when the back door opens they need to run and hide. Our dogs would be very happy to snag a rabbit if given a chance.
Posted by Sarah at 2:08 PM