He's an All Star

Allstar Nate
Originally uploaded by Teckelcar
Part of the excitement of winning their team's division is that the top five players on the team get to be part of the All Star team.

So Nate got to be on the All Star team.

You can see how pleased he is in this picture. He is warming up for the first game of the tournament (each division fields a team in the tournament).

It was a very nice bunch of boys and they had a great time playing together.

Nate got to keep his position at top of the batting order and you can see what a fierce competitor he is in his "game face" picture. I took it while he was taking a few swings on the on deck circle. Just before hand I asked him to turn and face me and he immediately went into his batting stance. 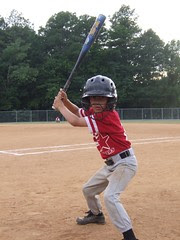 I think of him being my sweet goofy boy with the puppy dog eyes, but I forget how focused he can be when he plays.

This focus pays off. He got to be catcher for a fair amount of the tournament and did a good job covering the plate, but his big moment was in center field. He did an amazing catch. It was a reach, but he hung on for the out and then fired it in the the infield. I called up Meryl just afterwards, when the next batter knocked another one to center field. He stretched out and his glove just got to the ball, but not enough to catch it. He came so close.

Larry told me afterwards that one of the other coaches said during the second hit "Do it again Nate!"

Unfortunately the team lost all three games and did not advance, but they were competitive. With a bit more time and practice they could have been very good.

Oh and Nate, he got the game ball during the last game for his amazing catch.
Posted by Sarah at 4:52 PM