Summer is back with a vengeance. For the past few days we have been enjoying the most delightful weather. Temperatures were in the low to mid eighties, humidity levels have been down and each night the temperature would drop to the mid fifties.

Sadly all good things come to an end and yesterday the temperature started to creep up to the nineties. We are back to Virginia's normal sticky, icky summer weather. 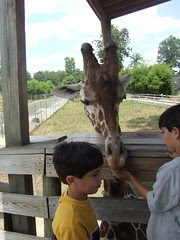 feeding the giraffe
Originally uploaded by Teckelcar
Luckily I realized that the good times wouldn't last, so on Monday I took my brood to the zoo.

The parking lot was more than half full when we arrived, but as always I snagged a spot near the entrance. With passes in had we sailed in and bought a couple of cups of zoo treats. The animals were fairly active that day, even thought it was mid afternoon. They too appreciated the nicer weather. As always one of our favorite stops was the giraffe petting area.

Jake and Nate took turns feeding this particular fellow. The giraffe was just tall enough to get its head over the fence.

Max and Rebecca were far more interested in the younger giraffes that were below the fence. 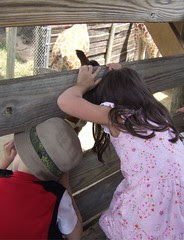 come over here
Originally uploaded by Teckelcar
They would reach through the fence and try to entice the "baby ones" to come a little bit closer. On the whole they were successful. The smaller ones were a bit skittish, but the lure of food was hard to resist.

After awhile we tired of the giraffes and moved on.

The rest of the zoo was pleasant, except for a bit of whining from the younger set for snack. It was far too early and the whining sealed the deal, no snack until we get home. They got over it when we saw the deer.

There are a number of fawns this year and one of them was actually gamboling about. I shot a short little video of the fawn in action.

I think the odd soundtrack actually adds to the film. Guess which of us said what.
Posted by Sarah at 12:57 PM