For My little Rebecca 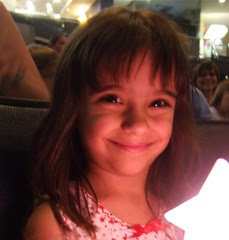 Rebecca
Originally uploaded by Teckelcar
Rebecca is a very girly girl and loves all things pink and purple. Her all time favorites are Barbie, My Little Pony and Hello Kitty. Her love of all things feminine is quite a feat considering she lives in a household full of boys. It is particularly mystifying for me because I was quite a tom boy.

I hated Barbie and I don't get Hello Kitty, but I understand the pony thing. Admittedly I liked real ponies, but My Little Pony is close enough.

Two weeks ago we caught a commercial advertising a Live action show featuring My Little Ponies. Rebecca immediately started bouncing about, she wanted to go. That night I ended up buying tickets for the two us. It would not be my first choice of entertainment, but I knew it would make my little girl very happy.

invite
Originally uploaded by Teckelcar
The following two weeks were filled with anticipation. Each morning she would ask me how many days until the pony show. As the days counted down she grew more and more excited.

Sunday morning she couldn't wait to leave. She dressed up in a dress and got her dress shoes out. She was delighted that I too wore a dress, but wondered why. I explained since we were going to a show and it was about a tea party I felt I should dress up. Just before we left I told her to go fetch one of her ponies, I guessed (correctly) that most of the younger set at the show would have a pony in hand.

teapot
Originally uploaded by Teckelcar
The car ride was a bit long, an hour and a half, and Rebecca ended up sleeping for part of the ride. It probably was too long, but Charlottesville was the closest performance to our house. Otherwise it was a good trip and the arena was a snap to find. I had one funny moment when I pulled into the parking lot and showed my prepaid pass. He was pleased to scan the pass and not deal with money and then told me about the previous driver. All she had was a $100 bill and expected him to make change. I was flabbergasted. Who drives around with a $100 bill and expects parking attendants to make change? There are some odd people out there.

The rest of the afternoon unfolded as I expected. Rebecca was delighted with the show and had a wonderful time.
Posted by Sarah at 8:20 PM