Invasion of the Poodles

When I was very young my mother inherited her sister’s standard poodle. Casey was very smart and affectionate. She and my parents’ dachshund Throopie became best friends and would regularly hunt together. I have very fond memories of the two and as a result I like both breeds very much. 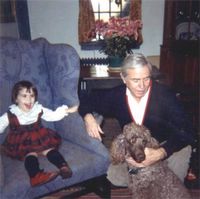 Me, my father and Casey

However, I do not like the two poodles that roam my neighborhood.

On Sunday when I came home from the glory that is Costco I saw the two poodles that peeve me in my driveway. With an exasperated sigh I stopped my car. The stupid poodles were aimlessly milling about. As I sat there glaring at them I decided that this is it. I’m going to catch those stupid poodles and call their owner. I have a large wire crate in my garage and a couple of 20 foot leashes. I could probably stuff one poodle in a crate and tie the other one up.

When I got out of my car the stupid poodles started to retreat to my backyard and bark at me. I slowly approached them as they swirled about. One of the stupid poodles then had the gall to GET UP ON MY DECK! ARGH!! That’s it, I want those dogs gone.

I could hear my dogs baying from inside the house. “Intruders! Intruders!” they seemed to be barking. “We must get those poodles!”

I herded the stupid poodles toward the front of the house. I then decided that maybe I should tell Larry what I was doing. He had stayed home with the kids so I could experience Costco without children in tow. So I went inside and told him that I was going to follow the stupid poodles to their house and talk to their owner.

When I went back outside the stupid poodles were hanging out by my mailbox further defiling it. As I approached, the stupid poodles they bolted across the road and cut through the Cs’ backyard. At that moment a car was pulling out of the Cs’ driveway. I asked the driver (a friend of the Mrs. C) if she knew where the dogs came from. Yes indeed, and she pointed to the house directly behind the Cs. It turns out that Mrs. C had complained about the stupid poodles hanging out in her backyard. Gee, what a surprise.

So I marched down the street to the supposed home of the stupid poodles and rang the doorbell. A cacophony of barking greeted the bell. Ah, this must be the house. The dogs were quickly (!) shushed and the door opened.

Up until this point I had been emboldened by righteous anger. But this guy was huge! He towered over me. I think he was over six foot four with very broad shoulders. I pressed on. I politely introduced my self and indicated where I live. A toddler then appeared, peeking between his father’s legs. Smiling, I then asked if he by any chance had two standard poodles. He looked uncomfortable and a little bit nervous. They were indeed his dogs. I then calmly related my saga of what his dogs were up to and how tired I was of it. I mentioned that I had fenced my yard, but I now had to do a poodle check every time I let out my dogs. He apologized and said he was looking into fencing his yard. He claimed that his dogs would stick nearby if he remained outside, but sometimes he had to go in to tend to his son. I also found out that one of my next door neighbors had been FEEDING THE STUPID POODLES. No wonder they had been in my yard. I then reiterated my concerns and finished by saying he has beautiful dogs (and they are lovely to look at) and it would be a shame if they were hit by a car. He promised to keep better control of his dogs.

So far so good, I haven’t seen the poodles since.
Posted by Sarah at 1:50 PM